According to research commissioned by CWT, the global travel management company, only 35% of global business travelers feel very confident about not compromising their employer’s data safety when traveling. Travelers from the Americas are significantly more confident (46%) than those in Asia Pacific (28%), or Europe (27%).

“These results show there is still a lot to do around educating travelers on how to look after their company’s data. For instance, connectivity in public spaces can put company data at risk,” said Andrew Jordan, CWT’s Executive Vice President & Chief Technology Officer. “Awareness and training are key to protecting against any possible security breaches.”

When traveling, the three situations in which respondents were most concerned about exposing company data were having their laptops or other mobile devices stolen, or lost (29%), using public Wi-Fi (21%), and working on their laptop or other mobile devices (9%). These were followed by unintentional sharing of company documents (9%), accessing company emails (8%), opening a file or visiting a website they shouldn’t have (8%), and disposing of paper documents (6%).

These concerns are justified since nearly half of business travelers were concerned about a security breach while online or trying to get online. And this was not the only issue: 37% admitted to downloading an unknown file from an unrecognized sender – and the same percentage opened a phishing email.

Fortunately, most business travelers took action when they became aware of a security or data breach. 37% of surveyed travelers claimed to have immediately shut down their device, 25% reported it to their company, 34% notified their company’s IT department. 62% of those polled confirmed that they knew how to report a phishing email appropriately.

Less than 20% of business travelers said that they received frequent and formal communication and guidance about data and internet security from their company, while 34% said they received some guidance on what not to do.

The CWT Safety & Security Study was created by Carlson Wagonlit Travel and conducted through Artemis Strategy Group between the 29th of January and the 9th of February, 2018. Survey data was collected from more than 2,000 business travelers from the Americas (Brazil, Canada, Chile, Mexico and the United States), Europe (France, Germany, Italy, Spain, Sweden and the United Kingdom) and Asia Pacific (Australia, China, India, Japan, Singapore and South Korea). To participate in the study, business travelers were required to have made more than four business trips within the past 12 months.

Companies and governments rely on us to keep their people connected. We provide their travelers with a consumer-grade travel experience, combining innovative technology with our vast experience. Every day, we look after enough travelers to fill more than 260 Boeing 787s and 100,000 hotel rooms - and handle 105 events. We operate in around 150 countries, and in 2017 posted a total transaction volume of more than US$ 23 billion. 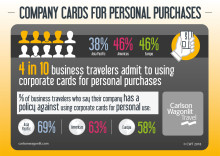 ​According to research commissioned by CWT, the global travel management company, four in ten business travelers admit to using corporate cards for personal purchases – 46% of American and European travelers, and 38% of travelers in Asia Pacific. 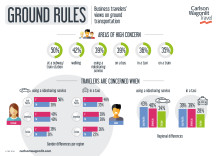 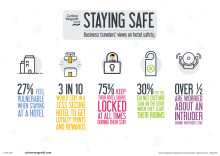 ​Globally, three in ten business travelers are happy to sacrifice safety for hotel loyalty and rewards incentives, according to research commissioned by Carlson Wagonlit Travel, the global travel management company. Travelers in the Americas are likeliest to do so (39%), followed by Europeans (34%) and travelers from Asia Pacific (28%).

Hands Off My Data – How to stay safe on the road

Securing our personal data can be a challenge while traveling. Being away from home and the office sometimes forces us to connect to unknown networks. We’re also likely to be working in public places where our information may be at risk. And, as we scuttle from one place to another, we may well lose things.